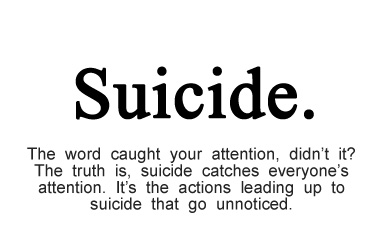 Many of you are familiar with one of the newest Netflix dramas, “13 Reasons Why.” If you’re not, it’s based off a book about a young high school girl, Hannah Baker, who ends up committing suicide; but before she does that, she records and sends out thirteen cassettes, each about a specific student/person from her school that basically states why they were a “reason” she decided to end her life.

I’m not going to lie, I watched it. It was very well done. The characters were personable, I enjoyed parts of the plot, but what it finally came down to was the fact that was I was a part of the audience watching a young girl go through bullying, slut-shaming, and ultimately taking her own life (they showed exactly how she killed herself), and it made me feel sick.

Typically in the hospital, we would have about one to two patients, maybe once or twice a week that would be admitted for a suicide attempt. However, for some time after “13 Reasons Why” was released and became such a phenomenon, we escalated to closer to one to three patients admitted for suicide attempts/ideation per DAY. At one point, we had FIVE in one day.

Here are 13 things I feel you should know when it comes to suicide.

If you or someone you know is experiencing thoughts of suicide, get help immediately. Do not ignore the signs. There are people out there who love and care about you and want you to succeed in LIFE not DEATH.

There is a 24-hour suicide hotline that can be reached at 1-800-273-8255 or if you’d feel more comfortable chatting with someone anonymously online, you can go to https://suicidepreventionlifeline.org/ and click the CHAT button on the upper right hand corner.