Early on in my child life career, we had a very unique situation happen at the hospital. One of the patients lost her tooth! She was so thrilled and showed nearly everyone who walked into her room the gap where her tooth once sat. I went to see it for myself and and asked her the big question,

“Will the Tooth Fairy be coming here tonight?”

All of a sudden the happy, gleaming girl shied away and sighed,

“Well… I’m at the hospital. So I’m not even sure if she’ll know where I am or where to find me.”

No amount of reassurance or me saying “the Tooth Fairy is a smart lady; I’m sure she can figure it out,” would work. So we put our imagination to the test. We walked to the playroom and began to write the Tooth Fairy a letter (see below).  The picture is a little hard to make out, but it says “I’m at the hospital. Can you please drop the money off at the hospital? Thank you! Memorial Hospital”

After finishing the letter and the drawing of the hospital she looks at me and says,

“Jessica. Do you KNOW how many hospitals there are around here? We need to say Memorial Hospital. How do you spell Memorial?”

So we quickly added it to the end hoping the Tooth Fairy would understand our train of thought. 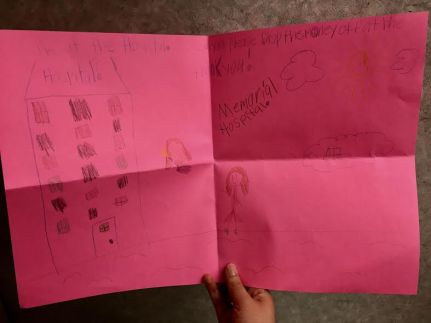 This morning, to our surprise, the Tooth Fairy DID visit. However, she was a little turned around, as you can imagine, not being used to the hospital so she did the best she could. This tiny note was left under her pillow for when she woke up. 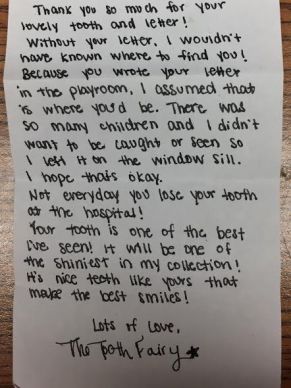 And when she read it and realized her money was waiting in the playroom, we made our way there. It might as well have been Christmas morning when we saw what she left – Pixie Dust along with her footprints and pink, glittery money; only the Tooth Fairy’s very best money. 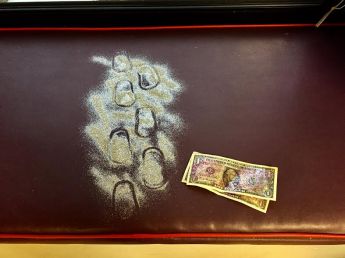 Yes, I may have gone a little overboard, but I don’t have children of my own yet so this was my first time playing Tooth Fairy and it was SO much fun! The look on her face when she saw what was on the windowsill and how eager she was to show everyone who walked in her room was what made it all worth it.